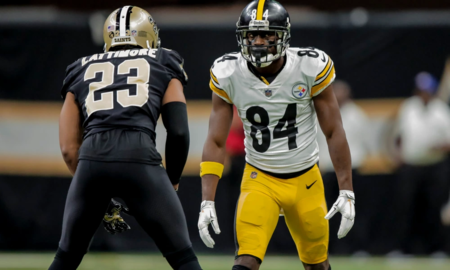 The New Orleans Saints were the last team to host embattled wide receiver Antonio Brown for a free agent workout, but they aren’t being considered by oddsmakers as a viable betting favorite. That’s probably because Brown had a meltdown in its aftermath, producing a high-profile, profane diss track against Sean Payton and claiming the Saints only invited him as part of a bizarre publicity stunt.

So it shouldn’t shock anyone that BetOnline hasn’t included the Saints in their list of favorites to sign Brown, who recently agreed to serve an eight-game suspension for multiple NFL personal conduct policy violations. The top spot belongs to the Green Bay Packers (2/1), but the same sportsbook has better odds of Brown not playing any games at all in 2020 (2/3). Other teams on their radar include the Seattle Seahawks (5/2), Tampa Bay Buccaneers (3/1) and Baltimore Ravens (4/1), each of whom have been connected to Brown to some degree in recent weeks. ...