Vikings’ Danielle Hunter has a sack in 7 consecutive games. Can Saints stop him? (1 Viewer) 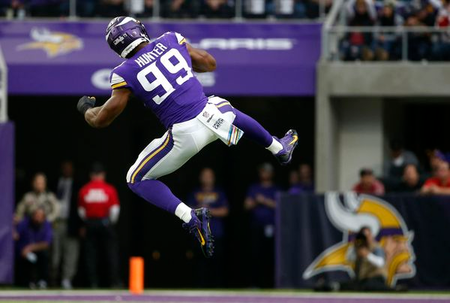 They did everything they could think to get a reaction out of Danielle Hunter, but nothing worked. The most LSU coaches and players could get from the Jamaica-born defensive end was a smile.

Hunter, who arrived at LSU as a 17-year-old and entered the NFL six months before his 21st birthday, was all business — always. His focus from the start was on football, said longtime LSU strength and conditioning coach Tommy Moffitt.

“A lot of guys come here, college athletes in general, they don’t always do well in school, they’re partying,” Moffitt said during a phone interview Thursday (Oct. 25). “This guy worked his rear end of at a very young age. You could tell he was serious about his development.”

That development continued with the Minnesota Vikings, who selected Hunter in the third round of the 2015 NFL Draft despite having only 4-1/2 sacks in three seasons with the Tigers. ...