Was yesterday's Eagles game the first we faced the Wildcat? (1 Viewer)

Offline
The wildcat didn't really make a comeback until last year, and I can't recall any games last year where we faced the wildcat formation. (granted, I missed a couple of games while in Europe last year.) The Eagles used the hell out of the wildcat against us...granted, their QB situation dictated that.

They seemed to effectively move the ball against us in this formation. Fortunately, we racked up so many points against them to the point they had to abandon that formation. Personally, it didn't seemed like the defense was quite prepared enough for the wildcat IMO. (could be just me) Don't get me wrong, we didn't give up any huge wildcat plays. But they seemed to get consistant chunks of 5, 6, 7 yards from the wildcat. But all in all, I think the defense did a good job against the Philly run. (Which I'm sure the Saints aim was to take Westbrook out of the gameplan.) 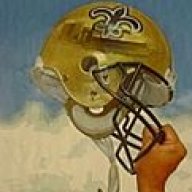 Offline
Miami used it a little in the preseason finale......I would say beyond that, it's the first time we saw it in the Regular Season. I really don't think the fad will last long.....they only got one good run on us with it the whole afternoon.
some of the reverse flea flicker option stuff MIA did last year was cool, but so far this season, it's blah....
Show hidden low quality content