We beat two of the darkhorses (1 Viewer) 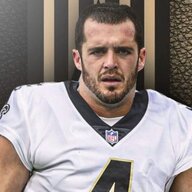 Offline
We beat the Seahawks and the Jaguars pretty bad. It got me thinikng about how our success has been more based on the game plan and film study. My question is do you think we beat these teams physically or mentally? Both defenses are very good, top 5 of the league. Makes me think maybe our losses have come from bad coaching decisions. How we can keep up with the Colts in the first half and lose to the Bucs blows my mind, It really justifies my thoughts on a agressive defensive play caller because we have smoked both of these teams on offense and i think we used the same gameplan every game but our defense never was as aggresive as our offense. So again. Was it physical or mental?

Offline
We beat the Jags because they had Gray at QB.

And still him and Reggie Williams torched David.

Offline
Offensive line played well and the Saints turned the ball over just once in each game.

This is why the Saints should look hard at bringing in Faneca and drafting Sedrick Ellis to help make both lines more consistant. Plus, Faneca would tremendously help out the running game and help form arguably the best left side of the line in football.

Pdlc said:
We beat the Jags because they had Gray at QB.

And still him and Reggie Williams torched David.
Click to expand...

I disagree. It was definitely a big factor, but it's not like we didn't absolutely destroy the Jags' vaunted defense.

Are you sure about that. I remember us walking up and down the field with ease all day on thier D. Does Garrard play D?

Saints put up almost 550 yards on that D and 34 points (7 more coming from McKenzie). I don't see how Gerrard could have played well enough to overcome that. Gray had some big passes in that game that allowed them to score some quick touchdowns.

Offline
Easy.. Ball control and efficiency. You're underrating the impact of Garrard.

DeuceMcAllisterFan said:
Easy.. Ball control and efficiency. You're underrating the impact of Garrard.
Click to expand...

They could not stop us at all, it was almost comical how easy Drew made it look that day. I'm sorry but we win that day regardless who the QB was.

DeuceMcAllisterFan said:
Put Garrard in the game and that int that basically decided the game wouldn't happen. The game was still competitive before the pick 7. The jax with their backup put 432 total yards on our D... Put Garrard in there and the out could have been different. This defense would have been shredded if Garrard played.

BTW Quinn threw 2 costly ints in that game... and finished wiht 3.... Garrard had 3 all season.
Click to expand...

Gray had to force throws to overcome a big deficit. I know at least one INT came directly from that. He still had a solid game overall. The Saints D didnt do much to stop their passing game. Outcome would have been the same IMO.

Offline
Yeah but they are in the playoffs and we are home watching.

I agree. We should have gone 0-16 this year, we got so lucky that we had no crucial injuries this year, ESPECIALLY for the jags game... WHEW

get real, we had our starting running back out, just imagine if Deuce was there....


we destroy the jags with or without garrad on that day.

Offline
The teams that beat us got to Brees and threw deep. It's that simple. On defense, either they sacked Brees or pressured him into avoiding the sack and throwing an INT. On offense, they threw deep on David. The games we've won we protected Brees, and in many of those games the teams didn't blitz. The philosophy "Don't blitz Peyton or Brady" is the opposite with Drew. Manning and Brady will beat the blitz most times, but Drew seems to fail against the blitz more often than not. I don't know if it's just poor blocking or poor decision-making, but the only time I see him beat a blitz is if the blitzer is late.
OP

SaintSeb said:
Gray had to force throws to overcome a big deficit. I know at least one INT came directly from that. He still had a solid game overall. The Saints D didnt do much to stop their passing game. Outcome would have been the same IMO.
Click to expand...

we did stop their running game which is what they do. I am really confident going into next year if we get our pass defense shores up. I do admit it seems odd both teams did not blitz against us very much which seemed like everyone elses gameplan. Watching these two teams just makes me realize how much the gameplan does matter and not the physicality.

Offline
We're a seeing glimpses of what is possible with this team. The Saints
are being re-built, and all of the pieces aren't there yet; put a tough defense
together that keeps the offense on the field, and we could be a team that beats teams like the Jags or Bears regularly. We should soon have the pieces to win our division year in and year out, like the Colts and Pats . Payton said he wants a team that plays like and competes directly with those teams. (Colts, Pats = the new NFL...)
Show hidden low quality content