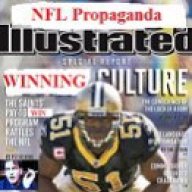 Offline
It looks like the entire NFC South took a dive. Only the Bucs have a win (vs the Falcons) and everyone else has a single loss.

Any thoughts on how the NFC South teams have played in general so far?

I thought we played much better in our first regular season game than we did in pre-season. I even thought the defense did decently for the first 2 and 1/2 quarters of the game. The thing that really bothered me was that Raider penalties seemed to really help us. If we had been playing a well-disciplined team, I don't know if we would have done as well. That's worrisome.

I only saw the Panther's game, and I wasn't blown away by them. Maybe Denver's D is still "that" good.

Is the entire division bad? Or, was week 1 just a rough week for the NFC South.

After week 1, what is your assessment of the NFC South and which team(s) is the most worrisome for us? I haven't had time to keep up with our competitors that much, so I'm looking for some outside input here.

Offline
i wouldn't be surprise the Bucs come out at top. They been improving each year.

Offline
What I saw from our Offense and Defense early on gave me hope, but as of the 4th quarter I have resigned myself to temper all hope and settle in for another sub .500 season. Just disgusted at a blown opportunity. Drew Brees throws for 400+ yards, 4 TDs and we LOSE AT HOME. I truly TRULY hope that I am wrong.

Just utterly disgusted right now. Plus Breaux is out for a few weeks with a leg injury. SMDH.

Offline
Most likely will be the Kittens, then the yucs then flip a coin between us and the clowns.

As much as it pains me to say kittens are still the best in our division. 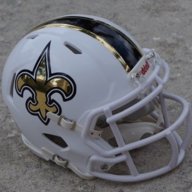 Offline
Right now, our most worrisome team in the division is the New Orleans Saints. If our recent history shows us anything, we score a lot less on the road than at home, and we can't outscore any of our division on the road. Carolina is solid. Tampa has a mad genius in their new OC. Atlanta is only 2 victories for us. Maybe we go 3-3 if we steal one

Offline
Panthers will win the division followed by the Bucs and it will be a fight for the 3rd spot between us and the Falcons .... a Brady less, Gronk less Patriots went into Arizona and beat the Cardinals .... Sean Payton and company should feel ashamed ....

Offline
Why is it dumpster fire? Atlanta and Ourselves are the only bad teams. Carolina lost by 1 point due to a missed field goal against The Super Bowl Champions but their D still looked solid. Tampa will surprise many people this year if Winston is consistent. So I personally wouldn't say it's a dumpster fire at all.

TheSaints7 said:
Why is it dumpster fire? Atlanta and Ourselves are the only bad teams. Carolina lost by 1 point due to a missed field goal against The Super Bowl Champions but their D still looked solid. Tampa will surprise many people this year if Winston is consistent. So I personally wouldn't say it's a dumpster fire at all.
Click to expand...

Atlanta and the Saints get another season of making our rivalry the only thing that matters while better teams play for playoff spots.
Show hidden low quality content