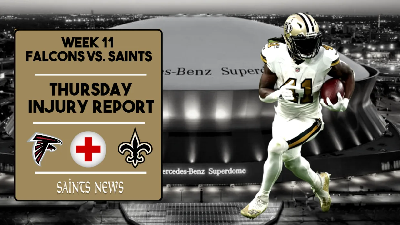 Saints star running back Alvin Kamara did not participate in the team practice on Thursday. His absence created some speculation with reporters and fantasy football experts. However, in the afternoon, Kamara spoke with the media about his foot injury and dismissed it by simply saying, "I'll be alright." The team allowed him to rest his foot before Sunday's rivalry match versus the Atlanta Falcons.

Drew Brees is still on the mend with his fractured ribs and a sore shoulder. The Josh Hill injury is more of a concern for the Saints. Being one of the best blockers on the team allows Coach Payton to install specific offensive packages. Last Sunday, without Hill and wideout Tre'Quan Smith in the lineup after injuries in the 49ers game, the offense lost two potent blockers. His presence would be an asset, especially for Jameis Winston and Taysom Hill filling-in for the injured Brees.