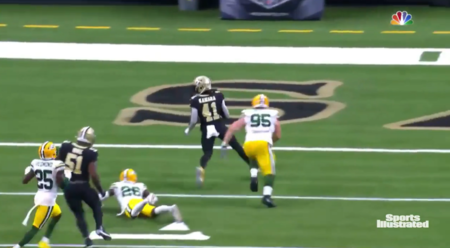 The Saints didn't make many believers after last night's loss to the Packers. Defensive struggles were evident again, some offensive issues were on display, and the penalties proved to be killer. Here's a look at the snap counts, playing time percentages, and some thoughts on several players.
Offense

Ryan Ramczyk, Erik McCoy, Terron Armstead, Tre'Quan Smith - 61 (100%)
Smith caught 4 catches for 42 yards on 6 targets. He clearly didn't have the type of game he did last week, and hopefully has a better outing against the Lions.

Drew Brees - 59 (97%)
Brees' numbers don't look too bad upon first glance, as he put up 288 yards and 3 touchdowns while going 29-of-36 on the night. Almost half of those yards came from Alvin Kamara. Brees didn't pull the trigger on some deep balls, and he said in post game that on one play he got sacked, and another was the dump to Kamara that went for the 52-yard score.