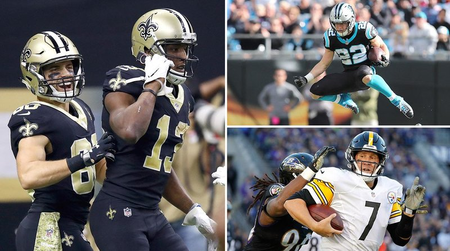 Reacting and overreacting to everything that happened on Sunday afternoon. Get the full Sunday breakdown from Andy Benoit and Gary Gramling on The Monday Morning NFL Podcast. Subscribe to The MMQB Podcasts now and it will be in your feed first thing Monday morning
Things That Made Me Giddy

Drew Brees to Michael Thomas Forever: The Rams had no hope of stopping Thomas (more on that later), who followed up a couple of pedestrian performances with a monster 12-catch, 211-yard performance as the Saints knocked off the previously unbeaten Rams to take the top spot in the NFC.

Zach Line as Kyra Sedgwick in ‘The Closer’: Yes, Alvin Kamara was credited with the yardage on the game-sealing fourth-and-1 conversion, but that was Line, original star of the Rookie Journey, sealing it with the lead block.

Big Ben Bounces Back, Baltimore Bummed: It looked like a potentially scary shoulder injury when Za’Darius Smith chased him down on a scramble, and Josh Dobbs had to come on for a play. Roethlisberger came back though, and kept making timely plays in Baltimore, with the Steelers going 10-for-16 on third downs, 1-for-1 on fourth down and controlling the clock for 36:29. With the win in Baltimore, the Steelers are now in total control of the AFC North. ...