What are the Saints getting by signing pass rusher Noah Spence? (1 Viewer) 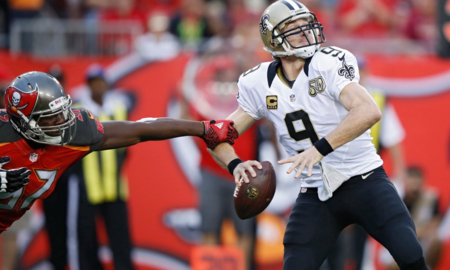 There’s no underselling the losses the New Orleans Saints suffered this week, with starting defensive linemen Marcus Davenport and Sheldon Rankins ending the year on injured reserve. Davenport placed second on the team in both sacks (6) and quarterback hits (16), while Rankins was finally progressing from last year’s Achilles tear before injuring his ankle in the other leg. While the defensive line is arguably the deepest position group the Saints have built, they’re going to miss the contributions those two playmakers have given them.under contract to broadcast games are allowed a 12-day window with which to decide whether a game will get flexed into a different time slot — except in Week 17, when that decision is made in just 6 days. However, in this case all parties involved (the NFL and the relevant broadcast partners) agreed to reach a decision in 6 days rather than the full 12-day allotment. That’s obviously not great for fans who have to adjust their travel plans on such short notice, but that’s showbi

So to help mitigate the losses, New Orleans signed free agents Noah Spence and T.Y. McGill. McGill is a defensive tackle in the same mold as Rankins, and he figures to help round out the rotation behind starters David Onyemata and Malcom Brown, and top backup Shy Tuttle — assuming he shows enough this week to warrant playing over Taylor Stallworth, who logged 300-plus snaps a year ago and is now on the practice squad.

Spence is the really intriguing addition. At 6-foot-2 and 263 pounds, he fits the mold the Saints like for a situational pass rusher who can win with speed off the edge, much like players already on the roster in Trey Hendrickson and Carl Granderson. Davenport, the starter at this position, is more suited to playing in base packages at 6-foot-6 and nearly 280 pounds. Without him, expect hybrid tackle/end Mario Edwards Jr. (6-foot-3, 282 pounds) to spend more time out on the edge when the Saints are in base, or defending against the run. ...