What book needs to made into a show/movie? (1 Viewer)

Offline
What book (or series of books) is begging to be made into a movie or TV show? You can also suggest a book where a movie adaptation just didn't do it justice and needs to be redone more in the spirit of the source material or with better quality directing/acting.

Mine is George R.R. Martin. I'd like to see Song of Ice and Fire put into an HBO show in the style of Rome (his material is R-rated). 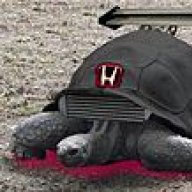 Online
Stranger In A Strange Land. Or most anything by Heinlein, except Starship Troopers.

I hear they're going to redo Conan. I hope it's more in tune with Robert Howard's version and not the silent lunk Arnie played.

Taurus said:
Stranger In A Strange Land. Or most anything by Heinlein, except Starship Troopers.

I hear they're going to redo Conan. I hope it's more in tune with Robert Howard's version and not the silent lunk Arnie played.
Click to expand...

I recently read Starship Troopers. I was amazed what they did to the book. The movie had almost nothing in common with the book. Some how they turned the book into a heroic love story. Of course, I shouldn't be surprised after having seen Troy.


But, I do have to say that the move is a guilty pleasure of mine. What's not to like, giant bugs and firearms.


of course, it would probably be ruined like most of his stories do when they go to the big screen
OP


of course, it would probably be ruined like most of his stories do when they go to the big screen
Click to expand...

Good call, though that series jumped the shark after book 4 or so...when he started rushing them out every few months. The first ones were incredible, though.

Online
The Autobiography of Benvenuto Cellini

Offline
What I would really like to see is the entire Dune series, including the prequels and final two books done by Frank Herbet's son done. I just can't get enough of the Dune Universe. The I like the first Dune movie done by Davis Lynch, but it has not aged well and I saw it before I read the books so I didn't realize how far off it was from the books and how much deeper the books were. The Sci-Fi miniseries was also pretty bad, although the Children of Dune mini-series they did was pretty decent. Anyway, I'd like to see those done, but I'd be really disappointed if they were not done well.


I'd also like to see David Weber's Prince Roger Series (March Up Country, March to the Sea, March to the Stars and We Few) done. And, it would be cool to see some of Spider Robinson's Callahan Chronicles done in movie form. Of course, this all assumes the movies are done well.

Oh, and I'd also like to see a movie version of "Zen and the Art of Motorcycle" maintenance. Apparently Robert Redford was going to do it years ago, but never did.

Offline
Flyboys by James Bradley. And not that farce that was the movie version of Flags of Our Fathers which was destroyed when put on the big screen.

I think the best way to tell the story in movie format would be a Spielberg/Hanks collaberation like Band of Brothers on HBO. It would be an instant classic, IMO.
OP

Offline
I read the first Dune book, and thought it was one of the most amazing, original stories I've ever read. Never could get into the second one and just gave up after that. I've heard they got better, but after that first one I think my expectations were just too high.

Offline
Confederacy of Dunces. I would like to see if they can recreate the same feelings in me that the book did. If I walk out of there wanting to knock the living snot out of Ignatius in the end, then I'll be impressed. Then again, I think anyone would have that same feeling about him.

St. Widge said:
I recently read Starship Troopers. I was amazed what they did to the book. The movie had almost nothing in common with the book. Some how they turned the book into a heroic love story. Of course, I shouldn't be surprised after having seen Troy.
Click to expand...

I don't think I've ever seen a film that stayed that close to the plot of its book, yet miss the whole flavor/point/etc. of the book at the same time. Of course, there were added characters, yet they followed the actual plot of the book fairly closely while leaving out and adding just enough to twist it into "90210 In Space" at the same time. Just. Awful.

To answer the original question, I would love to see Greg Iles' "Dead Sleep" made into a film. Excellent book.
Heck, I can even cast it, plus filming in New Orleans couldn't hurt the economy any...

Also, I think "The Rule of Four" would be a great movie. They might have a hard time selling it after the box office disaster of "The DaVinci Code" but despite apparent similarities, "Rule of Four" isn't screwing with anybody, isn't chock full of inaccuracies that make historians roll their eyes, and is actually a good book to start with, with well written characters one can care about.
Last edited: Feb 11, 2008
Show hidden low quality content