What is Taysom Hill's contract situation with the Saints? (1 Viewer) 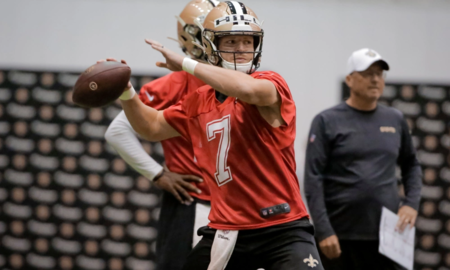 New Orleans Saints reserve quarterback Taysom Hill impressed fans, teammates and coaches in the second week of the preseason. Hill took over for backup Teddy Bridgewater shortly before halftime and rallied the Saints back into it, overcoming a 17-3 deficit to defeat the Los Angeles Chargers. Hill’s abilities were on full display as he ran and threw all over the Chargers defense. Comparisons to Steve Young have been floated.

It’s prompted questions among Saints fans as to who should be the heir apparent behind Drew Brees, a Hall of Fame-bound starter who’s nearing the end of his storied NFL career. The 26-year-old Bridgewater is the more conventional pick, and he’s mostly performed well against starting defenses from against the league. Hill, who turns 29 this week, is maybe more intriguing thanks to his athleticism and versatility, with experience at every position from slot receiver to gunner on special teams. ...