Offline
Vernon Davis has been back. How is he playing after that broken fibula? Is he explosive? It seems as if E Johnson is getting a lot of balls thrown to him (30+ catches for 382 yds).

The 49'rs need to pass to set ip the run as I believe we can simply stack the line and hold Gore to respectable numbers.

Offline
This is a great question and they could be a big key to their success this week. Their TE's are really good receivers. It will be important to run blitz often to keep them in to block. We don't want them getting off the line, especially with Simeneau hurt and Clark out in space.

This, of course, will mean that our db's will be in single coverage, but they will have to play big.

Offline
Vernon Davis played 40 something snaps last week, caught one pass for 11 yards. But in a pinch, Eric Johnson has become Alex Smith's security blankett. Davis has not gained Alex Smith's confidence yet. Re Davis' injury, he appears to be healed. The 49ers held him out at least two weeks longer than the original diagnosis, and I was reading daily during that time that Davis was running and working himself into shape. Davis appears to be healthy.

Also, Arnaz Battle has really come on at WR. He's had trouble with a knee for a couple of years, but earlier this season there was an article about one of the other 49er players talking to Battle about a remedy for the knee problem, and it seems to have worked. He's been playing much better since that time.

Offline
I live here in SF and listen to lots of sports radio. Vernon Davis started off dropping lots of passes and fumbling catches after being hit. He definitely was in a big doghouse after his first few games before being hit. He has incredible speed and size and the hope was that sitting out with that injury would help settle him down. Saints need to keep him down. That one catch is not a start, he'll be looking to prove himself further and get back in good graces with his teammates from a bad start to his rookie year after tons of hype.

Offline
I just hope our linebackers can cover the te. Davis has the tools to be a good one but we will see. This may be a tougher game than we realize.

Offline
I'm a little worried about Vernon Davis. We've had trouble with TEs this season and Davis isn't your typical TE. Didn't he run like a 4.3 forty at the combine? But he's still a rookie so who knows.

49ers TE Eric Johnson was carted off the practice field yesterday after injuring his knee. He was heavily favoring his left leg as he got off the cart. Details of the injury are not yet known. Rookie TE Vernon Davis, who recently returned from an early season broken fibula and has gotten an increase in playing time lately, would likely start for Johnson if the injury is serious. 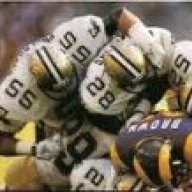 Offline
E.Johnson will be avaliable after the season. Looks like the Niners will not be able to afford him. I think he'd fit in well as a Saint.

Offline
...E.Johnson will be avaliable after the season