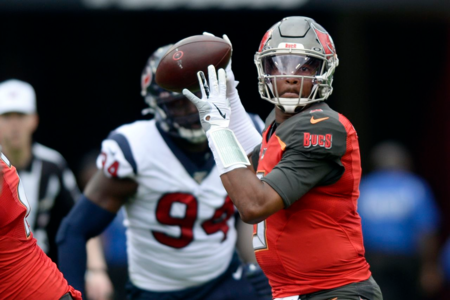 The 2020 NFL season will be unlike any season ever before it for a lot of reasons. Let’s focus specifically on the quarterback position.

Think about it: What if Tom Brady or Daniel Jones test positive for the coronavirus in the middle of the season? That would mean that player would, theoretically, have to sit out for two weeks, and the Buccaneers or Giants, in this case, would have no choice but to temporarily hand the keys over to the backup.

Some teams understood that this offseason and invested in backup quarterbacks, including the Giants in signing Colt McCoy.

Others strangely stood pat, like the Rams and Titans. There is still plenty of time to add another quarterback before the season — Colin Kaepernick, anyone? — but for now, let’s take a look at each team’s quarterback situation. ...

Similar threads
Ranking the NFL's most likely worst-to-first teams -- and first-to-worst
How far could the Packers and Seahawks fall? Barnwell predicts NFL teams most likely to decline
Ranking all 32 NFL teams by their under-25 talent
Which teams should pursue Antonio Brown?
Saints' Sean Payton has some advice on mustard stain removal best practices
Best Car dealerships on north shore the Mississippi gulf coast and south shore.
Do the Saints have the best trio of Safeties? Do the Saints have the best DB Unit?
Demario Davis is still trying to unlock the best version of himself. How scary is that?
Picking the NFL's best offenses at every personnel grouping
Healthy Alvin Kamara prepared to show off his old, new self with New Orleans Saints
Why the Saints are uniquely prepared for this offseason adversity
New Orleans Saints receiver Michael Thomas prepared to continue assault on NFL records
Networks have been notified to be prepared to offer alternative programming, per MLB.
Share:
Facebook Twitter Reddit Pinterest Tumblr WhatsApp Email Link