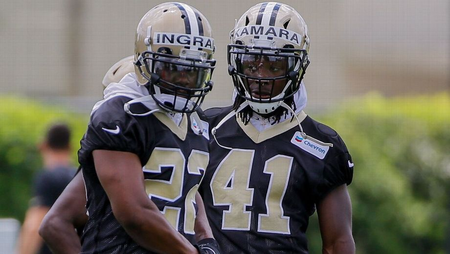 METAIRIE, La. -- The bad news for Alvin Kamara's fantasy owners: He won't be averaging 23 touches per game anymore like he did over the first four weeks of this season, when fellow New Orleans Saints running back Mark Ingram was on suspension.

Kamara was a monster over those four weeks -- with a monster workload. He led the NFL with 611 yards from scrimmage and tied for the league lead with six touchdowns.

Then came Week 5, when Kamara had only six carries for 24 yards and three catches for 15 yards in a 43-19 rout of the Washington Redskins, while Ingram ran the ball 16 times for 53 yards and two touchdowns and caught two passes for 20 yards.

But here's the good news: That game was kind of a fluke, since the Saints jumped to such a big lead so early -- allowing them to give Kamara a much-needed breather. And he should see a lot more than nine total touches per week going forward. ...