Where are they now - Eddie Kennison (1 Viewer)

Offline
Hailing from Lake Charles, Kennison was a standout at LSU in the first half of the 1990s, when he led the Tigers' men's track team as a six-time all-American. His production as a receiver in Baton Rouge wasn't quite as noteworthy but he wasn't bad and he ran a 4.28 40-yard dash at his pro day, enough to make him the 18th overall pick (Rams) in 1996.

After three seasons with the Greatest Show on Turf, the Saints gave a 2nd round pick to bring him to New Orleans. Though Kennison had only one season with the Saints, oddly in the middle of his career, he led the team in receptions (from four different Saints QBs during the "Billy Joe" years) and yards. In a move perhaps representative of that era for the Saints, Ditka traded Kennison to the Bears for a fifth rounder (that the Saints used for TE Austin Wheatley).

Despite some drama, Kennison eventually settled in with the Chiefs two years later and where he put in five straight quality seasons, averaging 961 yards and 5 TDs during that span (peaking with 1102 in 2005). Kennison retired in 2008.

After football, Kennison appears to have discovered the world of wine and food. His company Barrel 87, started in 2014, is a "wine club" where members get different wines he selects and he also has a pairing service and will locate rare or unusual wines for members.

Kennison was inducted into the Louisiana sports Hall of Fame in September 2016, and here he is earlier this month on local Kansas City TV talking about what he's doing now with Barrel 87:
: Former Chiefs player Eddie Kennison now in the winery business - KCTV5

Also, here is a TV spot he had last year that will embed:

El Caliente said:
He should have gone into Sakè, the gross profit margin is higher (wine GP is 11%, Sakè is 60%).

Has anyone had any of his wine?
Click to expand...

I don't think he's actually making wine - he appears to see himself more as a guide. His club picks wine for you and will help with pairings, occasions, seasons, etc. But he isn't making any.

I am from the Lake Charles/Sulphur area. I have followed Lake Charles area college recruiting for years. Eddie had a problem getting eligible at LSU. He then went part time there until he scored high enough on the ACT. He signed with three other guys from Lake Charles High which was highly touted. Rumor is all four showed up in cream colored Cadillac convertibles! Eddie's Dad delivered mail and the only White dude's Dad was a principal. It is a big enough mystery how Eddie's Dad paid the costs of Eddie's part time studies.

I remember he bought a place on Ryan Street that was basically a drive through liquor store. Just what every Louisiana town needs, right? Still I hope he is doing well. 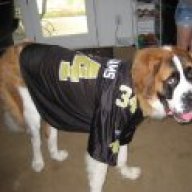 Offline
I visited Eddies club in KC. It is very nice. THe beer and wine selection, along with spirits is unreal. Really hard to find stuff. Great food, downstairs area is really high end...leather couches and chairs, dark woods, private cigar rooms...really cool. If ever in KC, absolutely worth a visit.

I have to retract a bit. I got Eddie Kennison confused with Orlando McDaniel. Orlando was the guy that showed up at LSU with three other athletes from Lake Charles High. Kennison graduated from Washington High.