Who Dat Playoff Throwback: Black and Gold to the Super Bowl (2009) (1 Viewer) 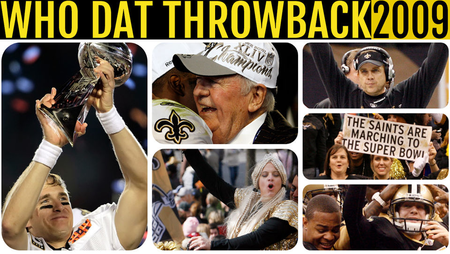 By Jim Derry, NOLA.com | The Times-Picayune

Forty-three seasons. It took 43 seasons for the New Orleans Saints to finally make it to the Super Bowl. And when they made it, they turned Miami into one big Black and Gold party.

This year, the Who Dats are hoping to do the same thing in Atlanta, but first, Drew Brees and company have some work to do. So while they're working, we take a look back at past postseasons -- not just the games themselves but what was going on in and around throughout those seasons with a focus on the playoff games.

We present the Saints playoff years in an eight-day series, continuing here with the magical season of 2009, and we'll end on the day before the NFC Divisional Round with, well, the play Who Dats would love to forget from last January.

2009: Yes, Louisiana, we really did win the Super Bowl

All the pain and suffering from more four decades of unfulfillment were ended when Saints defensive back Tracy Porter (22) intercepted Colts quarterback (and native New Orleanian) Peyton Manning, and with his right hand outstretched, Porter stormed 74 yards for a Pick 6. Pointing to the Who Dats, as if to say, 'This one is for you,' the pain was gone. Indeed, on Feb. 7, 2010, the Saints were about to win Super Bowl XLIV. ...

NFL playoff officiating decisions: What happened on controversial calls -- right and wrong -- and what came next