Who is Sarah Thomas? The story behind the NFL’s only female official (1 Viewer) 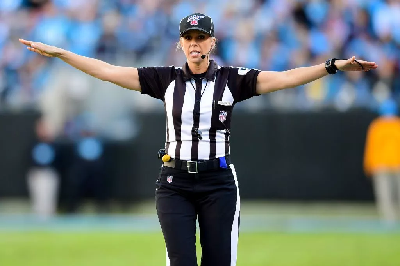 Sarah Thomas has been changing the game since starting on her path to becoming
an NFL ref, as the first female official at multiple levels.

Sarah Thomas, an NFL official, has defied the odds throughout her professional career, competing for positions in the male-dominated industry of football officiating. Being an NFL ref and official comes with pressure, expectation, and responsibility. A high school sporting superstar in Pascagoula, Mississippi, Thomas has paid her dues at all football levels. Now, as the NFL’s only female official, she is one of the key figures involved in making the game-changing decisions each week.

Who is Sarah Thomas?

Sarah Thomas is an NFL official who made history in 2015 when she became the first female hired as a full-time official. While she wasn’t the first woman to officiate an NFL game – Shannon Eastin stepped in as a replacement during the 2012 referee lockout – she is the first to earn the position full-time.

In January 2019, Thomas became the first female on-field official in NFL playoff history as part of the crew for the Divisional Round game between the New England Patriots and Los Angeles Chargers.

How long has Sarah Thomas worked for the NFL?

The NFL announced Sarah Thomas’ hiring as a full-time official on April 8, 2015. She had previously spent time officiating during training camp practices for the New Orleans Saints, where she earned rave reviews from head coach Sean Payton.