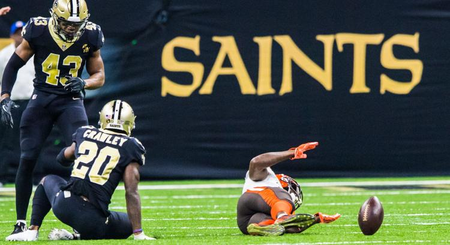 It isn’t hard to name the best players in the league at most positions.

No one is going to argue with Drew Brees or Tom Brady at quarterback. Alvin Kamara and Todd Gurley are safe names when discussing running backs. Now try to name the best cornerbacks in the league. Most of the ones that you’ll come up with probably aren’t among the league’s top performers.

That’s because the best players at the position change annually. A handful of players are living off reputation, but chances are they probably haven’t maintained their peak performance. That sort of thing doesn’t happen for most players. The ones who do it become legends.

“One year they’re here and outstanding, and the next year they’ve matched – you don’t find too many guys like that,” defensive backs coach Aaron Glenn said. “The special ones are in that category.”

There aren’t many “special ones” in the league right now. Using Pro Football Focus’ grading system as the baseline, the scouting service has only kept one player in its top 10, the Chargers’ Desmond King, at cornerback from a year ago. The rest of the list is entirely new. ...