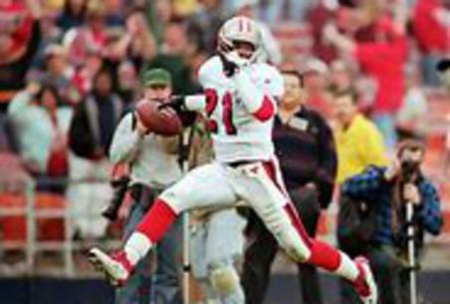 Memories of Deion Sanders high-stepping to a pick-six in a 1994 victory over the
Saints is one reason your intrepid scribe hates the 49ers.

As you know by now, the Saints will host the San Francisco 49ers Sunday in a game that will break the tie for the NFC’s top seed. Both teams are 10-2 after the Niners lost at Baltimore and the Saints avenged an earlier loss by defeating the Falcons Thanksgiving night. Beating the Falcons anytime, especially after that Week 10 upset, is sweet, but I was looking ahead to this week for a special reason. I hate the 49ers.

I know hate is a very immature attitude, not Christian-like and sounding like something on a list of one who hate asparagus, buttermilk or Ben Stiller movies. Yes, that’s my list. I loathe them all. But I don’t hate any of them as much as I hate the Forty F*#%& Niners! Why do I hate the 49ers? Let me count the reasons, some of them personal!

I was privileged to be a part of the Saints first greatest stretch in their modest history, commonly referred to as the Jim Finks/Jim Mora years. Between that marvelous first winning season of 1987 and 1992, the last year before Finks backed away because of illness, the Saints won more games than any team in the league (62) except Buffalo (65) and the team who need not be named (75). The Bills were the best team in the AFC during that period, so we didn’t see them often, but the other one was in our division, making it up-close and personal.