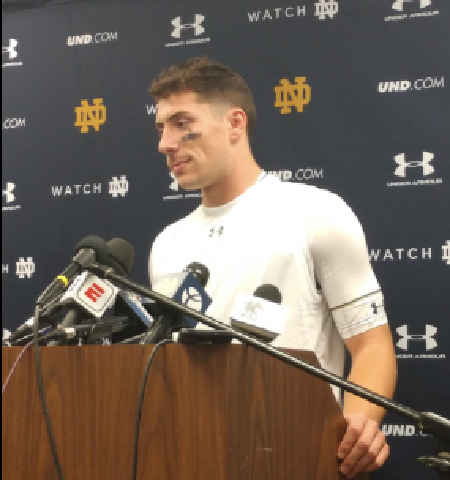 By Paul Banks | The Sports Bank

In his media opps with the Notre Dame media heading into the NFL Draft, quarterback Ian Book often spoke of his height, and how that was holding his draft stock down.

“Not many people thought he’d get picked in the fourth round,” said Book’s college coach, Brian Kelly, on media Zoom this morning. “Now he’s got a chance to compete for a starting position.” Book was drafted by the New Orleans Saints with the 28th pick of the fourth round (133rd overall).

With Drew Brees retiring, the Saints signal-caller position is now wide open, and how that plays out will determine how they do this NFL season. You can get ready for the season with BetQL’s computer picks, and see how they project the Saints to do in this first year of post-Brees.

Succeeding as a quarterback is all about winning, and Book is the all-time winningest QB in Fighting Irish history. He went 30-5 over his career, but he still entered the draft with about a 6th or 7th round grade. Many believed he would go undrafted, and then become a high-priority free agent.

However, if you saw “The Departed,” then you know what Nathaniel Hawthorn famously said, “families are always rising and falling in America.”