Offline
"After recently investing big free agent dollars on Jason David and Randall Gay, not to mention a 3rd round pick on Usama Young last year, it's pretty hard to envision them using a Top 10 pick on the position.

That leaves defensive tackle and outside linebacker as their two biggest needs and since Glenn Dorsey and Sedrick Ellis are both off the board Keith Rivers would probably make the most sense. The acquisition of Jonathan Vilma secures the middle but they still don't have an impact player outside and while some may consider Rivers to be a reach here he is easily the top true linebacker available and a legit Top 15-20 talent."

Besides, don't we keep 4 CBs on the 53-man roster anyway. Last year was MM, David, Craft and Usama. This year will probably be MM, David, Gay and Usama. A 5th CB probably won't happen.

So, if Dorsey or Ellis aren't there, I bet we either trade down or pick Rivers. 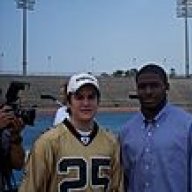 Offline
Wher'd you get that from?

Offline
I'm pretty sure that we would make room for a CB addition from the draft(we keep 5 Cbs not 4 anyway), but we probally have Rivers ranked higher than any of the CBs. Payton will look for a small school CB like Antwuan Molden in the 3rd instead of taking that risk with DRC in the first. I would love to have DRC but I don't see the Saint's drafting him.
Last edited: Mar 21, 2008

Offline
Does Jason David qualify as a corner?

rsonza said:
Besides, don't we keep 4 CBs on the 53-man roster anyway. Last year was MM, David, Craft and Usama. This year will probably be MM, David, Gay and Usama. A 5th CB probably won't happen.
Click to expand...

Offline
ok, so apparently we did have 5 CBs on the 53-man roster....but Fred Thomas on the inactive list every week doesn't really count. So this year, it's still going to be: 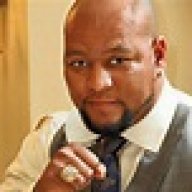 whodatfever said:
Does Jason David qualify as a corner?
Click to expand...

Jason David is a guidance system for opponents' footballs, causing them to unerringly fall into the hands, in stride, of opponents' receivers.

Offline
It's going to be funny when David has a great season. I'm rooting for him.

Offline
Hope I am wrong. I will be the first to admit it. Don't think so. 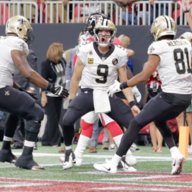 Offline
I gave up on guessing. Reality is that the FO put us in position to take THE BEST PLAYER AVAIL. Who cares who we get. Its an immediate upgrade (huge i might add) to any position. I
am like most and would like to see us be aggressive to get a young DT but i agree the value is not there for any CB in this draft. 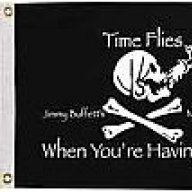 Offline
I remember back in Tulane Stadium, we used to talk the same way about Dave "which" Waymer did he go? 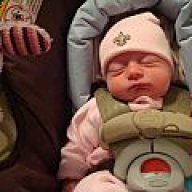 Offline
Thanks for the update Mr. Loomis.

Offline
Here's how u look at things

We don't know how long MM will be out and 2 of our top 3 cb's are on the wrong side of thirty. If not this year we will have to address this SAME issue next year. I'm for going with a db now where we can have the option of picking who we want vs. waiting and picking of what's left at our spot, meaning i'm expecting and drastic improvement in w-l record. Right now Rivers is more of a luxury vs. DT then CB is still in order our more pressing needs.

Rum said:
I remember back in Tulane Stadium, we used to talk the same way about Dave "which" Waymer did he go?
Click to expand...

Offline
And how old is Jason Craft and Mike Mckenzie??? They only have like two more years to go...
Show hidden low quality content