Offline
Hi all! First of all, Andrus has given his permission for this post, so I thought I would get that out of the way.

We are currently thinking of designing Custom NFL Themes for Windows XP and are looking for some input from the fans out there. Of course, we cannot release this theme without NFL licensing permission, and we are working on that. It also will not be a free theme just so you know unless of course the NFL or the Saints buy it and give it out to their fans.

Anyway, we are just looking for input right now, and of course we really love nice comments!

P.S. If you want more information about custom theming, just drop over to either of our sites at http://www.lightstar1.com/ or http://www.maxstyles.com/ to learn more.

UDPATED 11/08/06: Screenshot updated to SR.com theme only due to NFL restrictions on licensing.

Offline
I like it, but I'm tight with my money so you wouldn't be able to wrestle a nickel out of me.

Still its a pretty cool theme and an excellent idea. I wish you success in your endeavors.

Offline
I'd pay for that. That's some good stuff. I will check back on this thread for more info later!

Offline
Welcome to the EE Board, Lightstar. Nice work.

I really like the pigskin dimpling you used as a background.

Offline
Sweet! You got a saintsreport.com one in the works?


I like that too -- and the overall design. However, I'm really not crazy about the style of the center fleur-de-lis.

Offline
Looks great. I'd buy one - but only if some of the proceeds go towards sr.com.

Offline
I really hate to come off like a cheap SOB, but unless that and a few others come in a theme pack for the team(and possibly to include an sr.com one) then im really not into paying for it.

Aside from that, I think it looks freaking fantastic.

Offline
If SR.com gets a cut, I'll pay.

Rickboy said:
If SR.com gets a cut, I'll pay.
Click to expand...

Or at least have SR.com instead of that other website I've never heard of.

It does look really nice though. I'd probably buy it with a couple of adjustments.
OP
OP

Offline
Thanks for the input so far all, it is really appreciated.

DavidM said:
I like that too -- and the overall design. However, I'm really not crazy about the style of the center fleur-de-lis.
Click to expand...


Agreed. It's a great design and I would pay for it. But, the fleur-de-lis needs some work. It's a find fleur-de-lis, but it isn't the one the Saints use. The Saints' version is simpler and less stylized.

Still, it's great work and I would love to have a Saints desktop theme. I can't believe no one thought of this before.

Offline
looks nice, but maybe I'm not seeing it - how is it different from setting your own wallpaper and setting your desktop colors to black and gold?

Ted said:
looks nice, but maybe I'm not seeing it - how is it different from setting your own wallpaper and setting your desktop colors to black and gold?
Click to expand...

It could just be that I am technologically deficient, but I tried to do that, but I don't see a black and gold option for my desk top options. I also am not talented enough to go a good Saints background. So, I guess even if it can be done, I'd still be willing to pay a few bucks for it.

Ted said:
looks nice, but maybe I'm not seeing it - how is it different from setting your own wallpaper and setting your desktop colors to black and gold?
Click to expand...

Touch menu, task bar, etc cannot be changed beyond the included options in XP. I think they are green, silver, and blue. There's a darker blue option if you download the media center theme, but otherwise you're stuck. Unless of course you hack a couple of files and download third party visual styles... 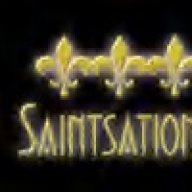 Offline
I actually have a theme similar to this for LSU on my computer at home and (just an idea) I love that the normal icons for recycle bin, my computer, etc. are all different. Like for the LSU theme, one is the old school tiger head, one the new logo, and another one the block LSU GEAUX font for the pictures of course underneath still states what it represents.

Maybe you could (no pun intended) jazz it up a little like that. I would think the more it doen't look like something you could simply adjust on their own, the better buy in you may have.

Also, they attached sounds to the LSU theme like there is the mike the tiger roar - for an error message, chinese bandits - for the shut down, and go tigers (1st down chant) - for the alerts, and hey fighting tigers - for the start up.

Granted, they may have more songs than the Saints, but it's an idea: You might want to do something like the first few trumpet notes of the second line - for an error, the U2 Saints are coming song - for the start up, when the saints go marching in (the Louis A version)- for the shut down, maybe the "who dat" chant - for an alert etc.

again, just some ideas to throw at you!
Show hidden low quality content