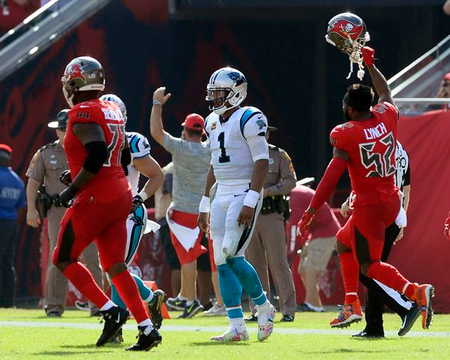 By The Associated Press

TAMPA, Fla. — Jameis Winston threw for 249 yards and two touchdowns to lead the Tampa Bay Buccaneers to a 24-17 victory over the reeling Carolina Panthers on Sunday.

The Bucs (5-7) won for the second straight time since Winston regained his starting job with team mired in a four-game losing streak.

The fourth-year pro completed 20 of 30 passes. And, for the second week in a row, the 24-year-old quarterback did not turn the ball over.

Meanwhile, Andrew Adams had three of Tampa Bay's four interceptions off Cam Newton, who came into the game saying he was playing the best football of his career, even though the Panthers (6-6) have lost four straight following a 6-2 start.

Winston threw TD passes of 3 yards to Adam Humphries and 13 yards to Chris Godwin in the first half, moving the No. 1 overall pick from the 2015 draft ahead of Josh Freeman as Tampa Bay's career touchdown pass leader with 81. ...