Offline
This thread is in response to Joe OKC's request. Unfortunately I don't have a lot of stories because my father, like a lot of vets did not talk much about his experiences in WW II in the south pacific. He was in the Army, tried to join the Marines after Pearl Harbor but was rejected because he was a boxer in New Orleans before the war and had slight hearing damage and missing teeth. My dad had three photo albums of war pictures but two were damaged when our water heater sprung a leak and got them wet, my mom threw them away instead of trying to save them. I still have one and treasure it. My dad died in 1989, I wish I had picked his brain more of his time in the war.

He was on most of the islands at one time or the other, the Phillipines, Guadalcanal, Iwo Jima, Bouganville and others. At one time he was tasked with helping to clear out snipers on the islands after the Marines took the island but came down with a particularly bad case yellow fever and malaria and was then made a cook because, well, he was a coonass from south Louisiana who had worked in a restaurant before the war, lol.

My mother told me of how my dad would sleep with a loaded Colt 1911 under his pillow for the longest time after he got home in 1945. They didn't have alot of help for vets back then so they were pretty much left to their own to deal with what they call PTSD today. My mom was there for him at that time. She told me of a time when they had moved back to her home near Purvis, MS and were in a movie theater in Hattiesburg when my dad tensed up and said there was a "jap" near them , sure enough when she turned and looked a Japanese-American family were sitting behind them. He said he smelled them, he learned in the war that the smell was a combination of sweat and Sake. He actually became good friends with them and the son worked for him for a time, their name was Sasaki.

I often used to look at the pictures in those photo albums and marvel at these kids, barely in their teens and twenties who were sent to Europe and the South Pacific and told to save the world. And that is why they are called the "greatest generation" because they did just that.

***Feel free to add any stories of your friends and family who have stories to tell to of any conflict they were in from WW II to the middle east.

Offline
Thanks Purvis_guy: I look forward to the stories... I hope that everyone with a story to tell will.. Like I quoted below, I find the local stories and connections so interesting. It's a shame about the pictures.

purvis_guy said:
At one time he was tasked with helping to clear out snipers on the islands after the Marines took the island but came down with a particularly bad case yellow fever and malaria and was then made a cook because, well, he was a coonass from south Louisiana who had worked in a restaurant before the war, lol.
Click to expand...

I am sure that ANYONE who said: "I've worked in a restaurant." was doomed to the same fate. lol

Of course you know we have the What do You Collect thread. I think I will show some of the WWII Cooking and food related items that I have next, just for you. Big thumbs up my man. and Thanks.

Offline
My Uncle Jim was a Marine. When I came back from boot camp, he set a fifth of whiskey on the table and said, "Let's talk, Marine."

ICELAND FISH HEAD SOUP - In a secret agreement to relieve the British troops so they could go home to fight the Germans, the 6th Marines were sent to Iceland in 1941, before Pearl Harbor, before we declared war. Winston Churchill even paid the Marines a visit. See, there were also color-coded contingency plans to send the Marines if the Germans invaded Britain. Uncle Jim described Iceland as the most miserable place, nothing but volcanic rock, ice and snow. Initially, the Marines had not been issued cold weather heavy clothes.
Food on the island was scarce. The Marines had to resort to a local delicacy which they considered noxious - fish head soup. Uncle Jim said it wasn't eating it that was hard, it was keeping it down afterward.

GUADALCANAL ORANGES AND DONUTS - Uncle Jim said he had no clue where they were going after that. Guadalcanal, in Solomon Islands in the South Pacific is about as far away as you can get. They went ashore, locked and loaded for bear. Nothing. No Japanese, nobody. Cakewalk. Richest soil in the world. You could grow anything. Lots of land crabs. The humidity quickly rendered their M3 "Grease Gun" submachine guns useless, rusted solid. The bolts were not chromed. More about this later. The Navy unloaded supplies onto the beach for follow-on ships that had yet to arrive. Then, the Japanese Navy showed up and he watched as the US Navy sailed over the horizon, not to be seen again for a long time. Japanese land forces attacked the Marines and the slug fest was on. The Marines quickly began running short of everything and the land crabs were feasting on the dead. You couldn't get Uncle Jim to even look at a boiled crab. He'd go pale and quickly leave. The Navy supplies on the beach were well-protected by armed guards and machineguns. There were oranges. Uncle Jim said the best thing he ever ate was one of those oranges. When I asked what happened to the guards, he just looked at me blankly. Guadalcanal made Sergeant John Basilone a Medal of Honor winner. Uncle Jim was part of the line of defenders with Basilone, the night when they fought off wave after wave of Japanese to the point that they had to go clear the piles bodies to open up lanes of fire. He described Basilone as the "meanest sonofab*tch" he'd ever met. At last, with the Japanese held off ashore, the Navy returned with relief forces. The USO showed up with donuts! Under an Allied Forces agreement, the USO was required to charge money for the donuts. This did not end well, but the Marines got their donuts! Before being taken out to the ships, a supply sergeant set up a desk and began individually processing the survivors to recover government property previously issued. Anybody who didn't have their M3 was placed under arrest. Nobody had them. They threw them away when they didn't work. Uncle Jim said they were standing there, clothes rotting off their backs, hadn't had a decent meal in months, under arrest, when colonel arrived to ask where the honorees were for the medal award ceremony on the ship. Well, they were all under arrest on the beach. The colonel ordered everybody released and put them on a landing craft, over the objections of the supply sergeant.

TINIAN, SAIPAN, GUAM - I wish I had paid closer attention to what Uncle Jim told me about this, but the only thing I can really recall is that he was called to the cliffs on Saipan where the civilians were throwing their children off the cliffs and jumping. The Japanese had told them the Marines were monsters and cannibals and would eat them alive. After struggling to stop them, the Marines were told to stand down. There was no point. These people were determined to die one way or another.

Once the government began putting records online, I began rooting around to find Uncle Jim's service record. I finally found him - 6th Marines, Cook!
Finally, I understood his emphasis on food. That doesn't change what he did at Guadalcanal. He was at the river with John Basilone. He was one of a handful of Marines who survived Iceland, Guadalcanal, Tinian, Saipan and Guam.

At his funeral, the pastor asked if any family members wanted to present part of the eulogy. I said yes. As I took the pulpit and began to recite the list of battles, the people in their audience looked stunned and began to whisper to each other. To them, to his friends and family, he was just an old night watchman at a factory who took great pride in his backyard suburban garden.

Offline
A few years back I found my dad's discharge papers and service record online but through the years I lost the link. I tried to find them again but because of the government shutdown the site is not active. 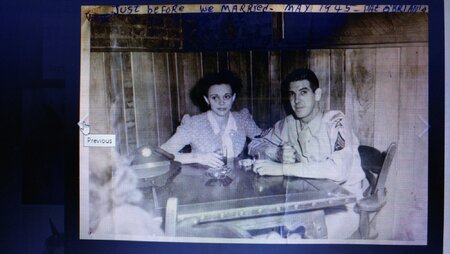 My mother had moved to New Orleans on her own after she graduated high school in Purvis. She had fallen in love with the city after seeing pictures in Life Magazine. She did several jobs during the war including her favorite: driving a streetcar. She was introduced to my dad by the landlady of the boarding house she was living in on St. Charles. The landlady was my dad's sister. They were married in May of 1945.
Show hidden low quality content