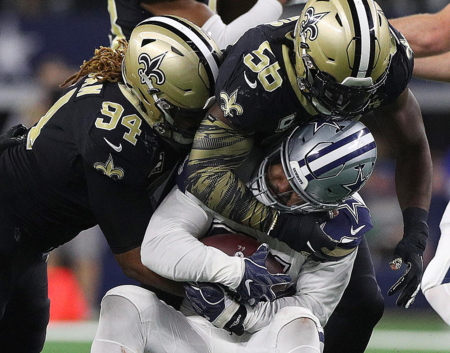 The New Orleans Saints have assembled a strong defensive unit stemming from their 2017 draft class in which they selected two pillars of the secondary in Marshon Lattimore and Marcus Williams.

This off-season there have been some additions and subtractions but has the defense gotten better, stayed mostly the same or has gotten worse?

According to pro football focus, at the end of the 2019 season the Saints as a whole ranked 7th overall, the defense allowed 341 total points which ranked 13th and Demario Davis was the highest-graded defensive player at 90.4.

We'll go position by position group to examine the Saints defense as a whole to determine if they've gotten better, stayed mostly the same or in fact gotten worse. ...

Similar threads
Saints D-line coach says Marcus Davenport 'definitely has room to get better' even after strong second season
Alvin Gentry on his players: ‘They stood by me. I want to do the same for them’
NFL QBs as women...Ill never look at Drew the same again lol
Share:
Facebook Twitter Reddit Pinterest Tumblr WhatsApp Email Link