Offline
Among other things, Dave Cockrum is credited as co-creator of the X-Men characters Storm, Mistique, Colossus and Nightcrawler.

He got no royalties from the movies. 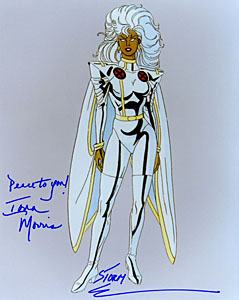 The 63-year-old overhauled the X-Men comic and helped popularize the relatively obscure Marvel Comics in the 1970s. He helped turn the title into a publishing sensation and major film franchise.

Cockrum died in his favorite chair at his home in Belton, South Carolina, after a long battle with diabetes and related complications, his wife Paty Cockrum said Tuesday.

At Cockrum's request, there will be no public services and his body will be cremated, according to Cox Funeral Home. His ashes will be spread on his property. A family friend said he will be cremated in a Green Lantern shirt.

Offline
Wow. too bad that he didn't see any movie money from his creations. I really enjoyed his work.
OP

He also did ink work on Superman, Superboy, Legion of Superheroes, Avengers, SGT Fury and like any good cartoonist, put a himself in X-Men #105. That's him with the beard in the middle.

Offline
Wow, that a little sad. I've read a lot of Cockrum's material over the the years, he was a very top notch illustrator.

It doesn't suprise me at all he got no money from the x-men movies, Marvel is infamous for take ownership of artist created characters in their publications. Thats why the Big 7 formed Image comics in the 90's.

Offline
I loved his Legion OF Superheroes. Did you know that both Nightcrawler and Storm were ment to be Legionnares....
Show hidden low quality content