You probably wont believe who the newest Saints fan is... (1 Viewer)

10:45pm ET - What is Florio Jr's favorite team?
He likes the Saints but he's a fair-weather fan. He jumped on the Steelers bandwagon last year.
Click to expand... 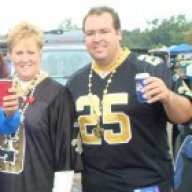 Offline
I'll take any fan that wants to pull for us. Even the Band Wanoneers. Let them pass on the word. Who-Dat!!!!!

Offline
You mean nobody had a baby? That's what these thread titles usually are. I'm bummed.

Offline
Florio needs to do a paternity test on that boy.

Offline
This is a crazy weekend. I had a huge family get together and my Father-In-Law wanted the Giants and 6 after I down loaded both team's depth charts and started tearing the "g"men apart compared to ours, even considering Jacobs running and some of the catches made by Hixon and Smith so he figures I'm a sucker to make a bet outside of Vegas' points. I said "The Line is Pick'em"! He almost choked! I said, look, just because I know the SAINTS will win by two scores or more, that's still no reason to make a bet I can get better odds with a bookie! He told me then that he would take the Saints and I could give him 4! I said,"What are you? Just playing around are really that clueless that I would actually make a bet where I would pull against my SAINTS?" We had us a day! Now comes on Peyton and his Colts who are the only team I think might give Our SAINTS a real run for their money and the jaw jacking continued late into the night. This will be a hard week to go through leading up to this game, that's for sure!
GEAUX SAINTS GEAUX!!!!!!!!!! 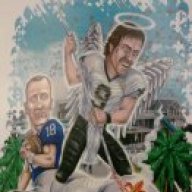 Offline
Well there might be some more pro-saints articles, but the reggie bashing will continue. yesterday he said reggie only has three more years left.
Show hidden low quality content