Offline
After reading a few of these new threads this evening, I don't know whether I should skake my head and laugh, or cry...

Copper this, Simoneau that, Reggie this, Donte that, Joe this, Payton that...

We've been saying all week that the Saints matched up well with Pitt, and it showed today.

We also said that if we didn't turn the bal over, and they didn't either, it would be a dog fight...

We'll we turned the ball over 3 times, Pitt none, and it WAS STILL a dog fight.

These Saints Are GOOD! Better than any team we've ever had.

I can assure you. They won't be pointing fingers at each other as so many are here today.

The worse case senario has already been played out:

We lost a game that was winnable. We're STILL in 1st place by a full game because of Hotlanta's loss, regardless of what happens with Carolina.

We lost to an AFC team, so we lose, but it could have been worse had it been a division opponent or or conference opponent.

Bottom line: We STILL control our own destiny.

How many of you who are hooping and hollering would have said the same thing in August?

Offline
Fair weather? You didn't read anyone's post in here that said that they were jumping off the band wagon... but I feel you on your post. We're still in 1st... but man it would have ben nice to take this one.

Offline
While I agree with you, was it really necessary to create two threads with the same post?

Offline
Fair Weather fans? Most of us would still have season tickets and be going to the games if were 2-7...

Offline
The hollering bothers me, but Ihave no problem with the hooping.​ 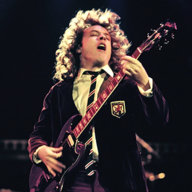 Back in Black & Gold

Offline
Dude take your meds. You are supposed to be upset after a loss, and you are supposed to see the things that need to be fixed, and in no way does that make you a fair weather fan. Stop being complacent learn about football and realize that people are upset, because they believe that this team is better than the game they played today. Stop hoping that we can win games without correcting problems. Dont get over it learn from it and correct it

Offline
Even if you hadn't dazzled me with all the cool use of bold, italics and font sizes, I'd still like your post

Offline
I would like to point out that just because you may complain about what a certain player did, or how he played doesn't mean that you are a fair weather fan. If you are not ticked off about the Saints losing a game they could have and should have won then that could be considered a fair weathered fan.

I am happy that Brees had another solid game.

Colston...they man is the man.

Happy for Reggie's first rushing touchdown and what a leap. Did that start at like the 4 yard line or something.

Jazzbo said:
Even if you hadn't dazzled me with all the cool use of bold, italics and font sizes, I'd still like your post

darkhornet said:
While I agree with you, was it really necessary to create two threads with the same post?
Click to expand...

Turns out this poster did indeed start another thread with the exact same post.

About 1 minute before this one.

kfran, please refrain from doing that in the future. That kind of thing tends to result in people all of a sudden not being able to post at all.