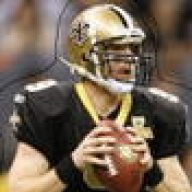 Offline
“It was the last play of the half and coach (Sean Payton) called the Hail Mary,” said Copper, a former standout at Washington High School and East Carolina University. “We practiced that play on Friday and the crazy thing was, we didn’t even throw the ball. We just ran to certain spots on the field. When (quarterback Drew Brees) threw it, it didn’t seem like anybody else jumped. The ball just landed in my arms.

“I just thought, ‘touchdown.’ I was excited. In the huddle before the play, I told Reggie Bush that if (Brees) threw it up there, I was going to catch it.”

Copper actually has a knack for catching the Hail Mary pass, but never has it come at such a critical time.

“I seem to catch those in practice,” Copper said. “Even when we practiced when I was with Dallas, I would catch them. It’s the first time I caught one in a game.”

Offline
Copper was GOLD on that play..

Offline
Excellent. Another good pickup for the Saints this year. This season has already surpassed my expectations. WOO-HOOOOO!

Offline
Couldnt believe it when i saw it. Dont think ive ever seen one live.

Copper has been hot of late. Three games ago, Copper hauled in six catches for 92 yards and a touchdown, his first with the Saints, in a loss to the Pittsburgh Steelers.

Copper had six receptions for 87 yards and another score two weeks ago against the Cincinnati Bengals.

&#8220;I appreciate the coach putting me in different situations to make plays,&#8221; Copper said. &#8220;I&#8217;m playing more receiver and I&#8217;m getting the chance to help my team win. We have a great quarterback, a great coaching staff and a great receiving coach. We have great guys on this team and it just feels great to help the team win.&#8221;
Click to expand...