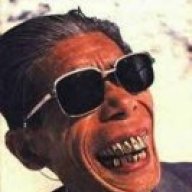 Offline
did to my poor proud people....


Hope, One House At A Time
Pearlington Mississippi was never much to look at, as far as towns go. Even before Katrina it had barely 1,600 citizens. It doesn't have a main street, or a town square. It doesn't have a mayor or a city council. Since Katrina, it doesn't have a post office, a library, or an elementary school. It's a collection of winding country roads, of mossy trees and swamps, dotted with a patchwork constellation of homes, most quite humble even before the storm sank them under twenty feet of muddy water.

It's primordial America. It's America before mega-malls and exurbs and freeways stitched it up and plasticized it. But this isn't the autumnal village America featured in political ads or Rockwell paintings, either. This is the dirty deep American South, scruffy and proud. Red mud and fried shrimp. Hard work and love of God. Blacks and whites on different sides of town, mingling in the middle. It sits on old Highway 90 midway between the decadent nights of New Orleans and the white beaches of Biloxi. It's a tiny microcosm of Louisiana and Mississippi lost in the bayous on the border between them. It's the old American dream, covered in drifting Spanish moss.
Show hidden low quality content