Offline
Photographer Bruno Stevens took pictures of an abandoned Lebanese army base afire during Isreal's invasion. He dutifully sent in captions explaining that either an Isreali airstrike or a misfired Hezbollah rocket set the place on fire.

A week later, Time Magazine carried one of the pictures with this caption:

“The wreckage of a downed Israeli jet that was targeting Hizballah trucks billows smoke behind a Hizbollah gunman in Kfar Chima, near Beirut. Jet fuel set the surrounding area ablaze.”

One of the pictures also ran in U.S. News & World Report, again with a caption saying Hizbollah had shot down an Isreali jet.

Stevens is upset. Since the photo has been called into question, the wire services are now trying to spin the story that it wasn't a downed Isreali jet after all, but that Isreal had indiscriminantly fired on a civilian target!

STEVENS: "This caption clearly says that there is no proof that an Israeli jet had been shot down and that the objective was indeed to destroy a legitimate military target. ...A week later TIME published this image shot at the same time as the first: They choose to caption it this way (I had NO control in this matter), they HAD my original caption."

I can understand the wire services getting their wires crossed. I can't understand them trying to spin it yet another way after their "mistake" has been caught by the guy who took the pictures.
OP

"A Hezbollah gunman aims his AK 47 at a fire caused by an explosion in Kfarshima, near Beirut, Lebanon, Monday, July 17, 2006. Lebanese TV stations broadcast video pictures Monday claiming to be an Israeli military aircraft falling to the ground in the area, but Israeli military said no aircraft was shot down over Beirut and there was no immediate confirmation of the cause of the explosion." 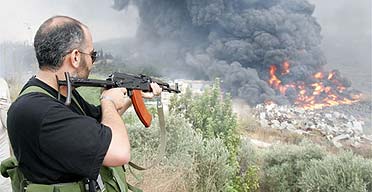 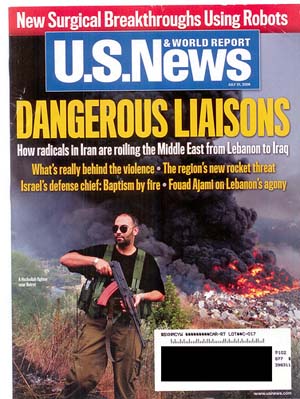 Offline
Closeup of the "wreckage of a downed Israeli jet." 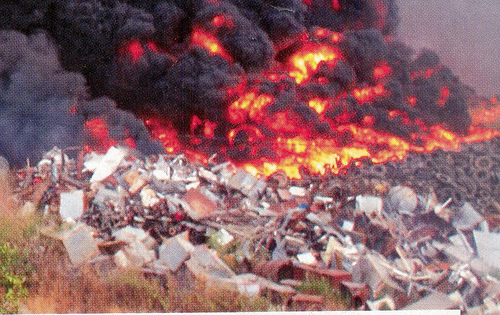 Offline
It is tires. Turns out an Al-Jazeera crew was filming nearby and caught what really happened.

A Hizbollah rocket launcher misfired and then an Isreali plane hit the launcher and it set the tire dump and the whole abandoned Lebanese army base on fire.

Offline
Happy Tuesday to you too, Widge!

But, the front page of U.S. News & World Report? They usually err on the side of caution.
OP

Offline
Stevens takes his assertions a step further. The real story of his photos was...well, here it is in his words:

Bruno Stevens: This is a very important piece of evidence showing probable collusion between Hezbollah and the Lebanese Army, there is little doubt that the Lebanese Army was aware of the presence of at least one missile launcher and at least one large missile on their parking lot. The size of the launcher, destroyed a couple of days later from the ground by an unknown party suggest missiles 10 to 14 meters long.

There were 6 to 8 large articulated trucks parked there, making it a very legitimate target for the Israeli Air Force, quite far away from civilian houses.

The quote is on a photographer's journal site. It's overloaded right now and very, very slow to load.

DadsDream said:
Happy Tuesday to you too, Widge!

But, the front page of U.S. News & World Report? They usually err on the side of caution.
Click to expand...

No doubt, it's pretty bad and certainly spins the story in a way that it might not have deserved. I assume it was one of those things where they just "knew" that something like that happened, but no one had gotten a picture of it, so they figured they would use another picture since they just "knew" it really happened somewhere. Bad journalism no doubt.

DadsDream said:
Happy Tuesday to you too, Widge!

But, the front page of U.S. News & World Report? They usually err on the side of caution.
Click to expand...

The answer is clear:

I would say Reuters is crooked. They've been busted so many times for running false pictures on the war in Lebanon now that it ain't even funny.