Offline
Yeah, my girlfriend put my dog Boudin in this devil outfit. I thought it was wierd at first, but I must admit that I got a laugh out of him running around in that thing.
Last edited: Oct 13, 2007

Offline
He doesn't look too thrilled in that last pic. Or is that just the devil coming out?
OP
OP

Offline
That was him trying to bite the devil costume as I would pull it away at the last second.

Offline
I have a dachshund, too. He didn't appreciate his little vampire costume last night.
OP
OP

Offline
He didnt like it either after the first few minutes. Kept trying to reach behind himself and bite the cape, which resulted in him rolling around on the floor. It went something like this: 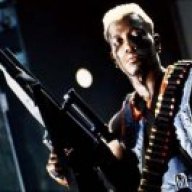 Offline
we tried that with my pug last year...he tried to bite it his batman cape and like you said he rolled all over the floor and then just laid on his back until we took it off him

Offline
There is a special place in hell for people who dress up dogs...
OP
OP

Offline
Lucky for me I dont believe in hell.

Offline
Then you'll be buried in Atlanta...

Offline
Whats cruel about it? Or was that a joke?

bop said:
Whats cruel about it? Or was that a joke?
Click to expand...


It was a joke but I am also against dogs wearing clothes.

I've got three dogs...one loves his costumes, another hates it...and the other one looks like a chew toy to the other dogs, so she can only wear it when they're not around.

I've got pictures of all three on the top of my website(just click on em for a larger view):
http://www.rasheedworld.com/
OP
OP

Offline
I figured thats what you meant but its hard to tell on a MB. I also cant put smilies with my messages because I cant find em on this new board so its hard for folks to tell when Im joking. Like when I responded to MLU earlier saying "lucky for me I dont believe in hell" it probably looked like I was getting a little defensive, but I wanted to put the laughing smilie there to show it was a joke.

BTW, my dog doesnt walk around in clothes like one of Paris Hiltons poor fashion accessory dogs. This was a Halloween thing. At least my gf didnt go with the original costume she wanted for him, a hotdog and bun.

EDIT- Oh yeah, my dog does have one other shirt besides his devil outfit, but I bought that because it says something funny on it. I cant type exactly what it says here, but to put it in a way thats allowed it says The "Female Dogs" Love Me.
Last edited: Nov 1, 2006
Show hidden low quality content