Offline
Michigan has at least four players that could be of very high interest to the Saints in the draft next year. Jake Long is a prototypical LT that could allow Brown to move back to the right side next year. I know both Brown and Stinchcomb have played extremely well thus far, however with Stinchcomb being a free agent, I'd rather draft Long than overpay for Stinchcomb who's really had only one solid, healthy year.

Michigan's TE, Tyler Ecker has all the tools to be a stud tight end in the NFL. Although depending on his 40 time, he might be a late first-rounder, he's currently projected to go in the 2nd round and would be a tremendous value if we could get him there. He combines excellent size (6'6 250) with good hands and is a dual-threat as a receiver and blocker.

Just for the New Orleans locals, Michigan's starting left guard, Adam Krauss prepped at Brother Martin and could be worth a later round pick for depth on the Oline.

On the defensive side, Leon Hall is as good of cornerback in all of college football. He has speed, size, and instincts. He has the greatest potential of all CB's in college football to be that highly coveted shutdown CB in the NFL that we desperetly need. Pay attention to him, if he lasts to our pick, I'll make a strong prediction that we take him.

At Linebacker, David Harris has come out of nowhere to be the one of the most dominant LBs this year. He's a sure-tackling, gritty linebacker. He also could be a potential 2nd or even 3rd round pick primarily due to his lack of straight-line speed (he runs a 4.8)

On the D-Line you've got two of the most dominant players. Lamarr Woodley at 6'2'' 270 has it all. He would, however, work best in a 3-4 Defense because of his tweener size. He's the team captain and is producing big-time numbers this year (11 sacks, 15.5 TFL, 4 FF, 3 FR, and TD). He's relentless off the edge and draws comparisons to Shawne Merriman (minus the roids.) Once again, his size and 40-time (his 10 yard dash is spectacular) might inhibit his value and if he's avalaible I think he'd be my first choice. He would play OLB for us in either a 3-4 or 4-3 scheme.

Last but not least, he's only a junior but DT Alan Branch at 6-6 330 possess incredible strength and quickness. If he comes out this year, he'd most likely be a top 15 pick and has the potential to be a top 5 pick with his performance in the next two games. He's a very fluid player and probably has the most raw talent of any college football player. He could help our run Defense immensely.

Pay attention, it's conceivable that out of the 44 players starting in tomorrow's game, as many as 30 could be drafted and 10 in the first two rounds. 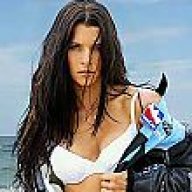 Offline
were you listening to Kiper the other day with D Patrick? He never mentioned Branch, although I think I have a man crush on him.

Offline
im going to be a michigan fan saturday, to bad i wont get to see the game

Offline
I'm going to try to leave work early in the a.m. so I can get down to N.O. in time to see the game. I usually get there around 3:30pm....so I'll have to get there an hour early.

I voted Leon Hall. Although he should be long gone before we pick.

Offline
I went Leon Hall because of this teams glaring need at cornerback, but Branch was a close second. Defensive tackles take a few years to adjust to the NFL. I would rather bring in a solid young guy like Branch and have him learn behind Tank Thomas.
Show hidden low quality content