...It's just that Bush can't make people miss in the NFL the way he did at USC, when he ran around and through defenders as if they were stalks of corn.

"I know it's got to be frustrating for him," said Eric Dickerson, who still holds the NFL rookie rushing record with 1,808 yards in 1983. "He's a talented player, and they expect a lot out of him. Sometimes it's hard to deliver."

There are several reasons Bush has yet to have a breakout game. Frequently, it looks as if he's hitting an opening too early, before the hole has developed. He hasn't gotten into a rhythm, either, with Deuce McAllister being the primary back. Also, the Saints have an offensive line that's better at pass protection than run blocking.

Offline
Hard to deliver with 5 carries a game....yeah that was one game, but that's the game that caused all the haters to come out.

Offline
I think it's more like the swiss cheese defenses of the PAC 10 have disappeared.

Offline
Well, if Duece isnt playing, he will get his chances

Offline
Reggie will be fine as soon as he just plays ball and stops trying to hit the homerun on every play. Things that worked for him before in college he can't get away with in the NFL but, that's okay. Reggie is a great back who does not have to hit a homerun every play. Sometimes all we need is a first down. What is going to happen is as soon as he relaxes and just runs the play without trying to make too much happen, that is when he is gonna bust one. See, Reggie has been a man amongst boys for a long time and, he could make all these risky moves and get away with it. If I were him, I would feel the same way. He has been so fortunate and lucky all through life that he feels he can make that spin move or throw that pass with a man draped on his reciever and everything is still gonna work out because that is what happens to me. As soon as everything just settles down and he lets the game come to him all will be fine. This guy will be everything he is supposed to be, mark my words.

Offline
Like Tony Parker of the Spurs says, you can't go 100 mph all the time, you need to pick and choose when to use your speed and your cuts to be truly effective.

DownWithDisease said:
I think it's more like the swiss cheese defenses of the PAC 10 have disappeared.
Click to expand...

There is a difference between Pac 10 defenses and an all american offensive line and the defenses in the NFC South and AFC North?

Offline
He's a rookie, give him some time to develop as a player in the NFL. Everyone agrees that there is a huge difference btwn college and the NFL. Just b/c he's not doing all the things in NFL like he did in college doesn't make him a bad or less than the player he was or is capable of. I mean look at the likes of college players like Blair Thomas, Mike Williams in Detroit, or even Gino Toretta...they all blew away the competition in college and look what happened to them. I think it's safe to say that Reggie is starting out on a better foot then either of those three afore mentioned "busts". The seasons barely halfway home just give him some time...if this argument continues in 2-3 years then we can wonder but for now just be patient.

Personally I think he's doing fine...not GREAT, but not BAD either. 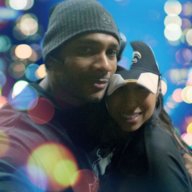 Offline
Bush will be fine. I have noticed that his problem is he tries to bounce it outside too much. With the Defensive Ends and Linebackers we have played so far it just won't work. What I have notice is that for most of the plays he ran between the Tackles he has had some success. Notice I say most of them. He did get lit up during the Ravens game.

I hope Deuce is able to play but if not this will be a great test on what Reggie and do solo. If we are going to even consider making the playoffs then we need Deuce healthy. Hopefully he shows us something on Sunday and we can rest Deuce for a few games.

Offline
The game is a whole lot faster, and the defensive players are a whole lot better. That's why Reggie hasn't gotten it together yet. He will eventually adapt to the NFL. Lets hope its sooner rather than later.

Offline
1. He is a rookie.. give him time to develop

2. He has been the focus of every defense

3. The Saints are 5-2.. so clearly bush isn't doing bad enough to hurt the team... imo, bush's prescence has helped the saints to their good record this year.. not to mention basically single handedly winning the bucs game (great blocking by the punt return team but still)

Offline
I think everybody is ignoring the fact that he is not breaking tackles. I think that is the problem, as soon as there is contact he is on his back. He needs to put some muscle on his legs. He will, he'll put on 10-15 in the offseason and two years from now he'll be one of the best backs in the league

Offline
Does anyone remember OJ's first year? Very similar situation with rookie running style until he got comfortable with the NFL style and the electric company. The bushwackers will get it together with Reggie soon enough.

Online
Think about this as well....when was the last time you saw Reggie lined up in an I running formation with Karney? Very rarely. Reggie plays in a single back set, usually goes in motion to confuse Defenses, with the recivers out wide, not many run blockers. I think RB's rushing numbers would go up significantly if they put him in the I formation with a FB and blocking TE. He probably isn't capable of producing Deuce type numbers but would be more effective as a pure runner.

BUT...I'm not suggesting Coach Payton needs to do this...Bush has been effective using him the way they do. He's great in space so those short dumpoffs behind the LBs that Bush turns into firstdowns are equilivent to handoffs. Bush had a terrible game last week no doubt. He's been plagued with a bad ankle yet has continued to play through it. Sometime this season a Defense won't focus on RB and he'll make them pay......
Last edited: Nov 3, 2006

TheDeuce53 said:
The Saints are 5-2.. so clearly bush isn't doing bad enough to hurt the team...

BTW, I hope someone marks this article, and brings it back when Reggie has a good game Sunday.

Offline
If I hear one more, "Once defenses stop keying on him, Reggie will make them pay,"... Seriously, I guarantee that teams focus on Tomlinson ALOT more than they do Reggie Bush. LT has 9 touchdowns and around on hundred yards a game. Defenses arent triple covering him anymore. The problem is him running straight to the sidelines. I don't wanna blame this all on reggie because I think he can definitely get it done between the tackles. Remember the Cleveland game where he ripped one for 18 yards dragging defenders? I think payton is trying to maximize his speed by shooting him to the sidelines on most runs. I would like to see him RUN the ball 25 times sunday and see how he does from a purely NFL running back standpoint. I wanna see four quarters of him running between and around the tackles as an all game back before i pass judgement. I'm still optimistic that he will be a great RUNNING back, we already know he's a great receiver.
Show hidden low quality content