The New Orleans Saints, along with the other NFL teams, have players on their roster that may not have yet produced at a high level or will move to different roles this upcoming season. These hidden gems may not yet be household names but could be a key to their team’s success in 2020.

In honor of the Easter holiday, here are a few of the hidden “Easter Eggs” on the New Orleans Saints roster. 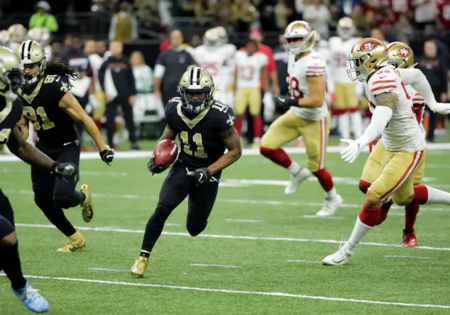 New Orleans Saints punt returner Deonte Harris (11) carries the ball during the first half against the San Francisco 49ersat the Mercedes-Benz Superdome.

Harris showcased his gamebreaking ability on special teams during his All-Pro rookie year. He averaged 26.8 yards per kickoff return, 9.4 yards per punt return, led the NFL in punt return yardage, returned one punt for a touchdown and broke several more returns for long gains. Harris was used sparingly on offense during the year, catching six passes for 24 yards. He showed off his deep speed during the Saints first-round playoff loss to Minnesota though, hauling in a 50-Yd. bomb.