Offline
I'm impressed with both of these guys. You've got Joe, the savvy vet, who see's his protege fast becoming the Saints #1 receiver, and he welcomes it with open arms - What a class act!

And then you have Marques - A kid who remains grounded and humble through all of the hype about his success, and wants to learn as much as he can from the savvy vet, Horn.


...'Horn said he has "hung out" with Colston a few times and has been impressed.

"His calmness, his humbleness and his eagerness to want to learn the game" make him special, Horn said. "I love Marques Colston because he listens. He wants to learn. He wants to get everything out of you that you have as a veteran. He's a quiet guy and his demeanor hasn't changed. That's what I tell him: 'Be yourself. Stay the way you are, don't change.' He's humble and that's what I love about Colston.".....

Offline
I have a feeling this is Joe Horn's last season as a Saint.

Offline
i hope not.i think we win sunday with joe in the game.

I really hope not. We would have won last week with Joe in the game. We need Joe, it hurts to only have one legit WR.

Why would you say that. I don't think so. I think Joe has a few more years left.
OP
OP

Joe's got a few more year's on his contract - Just renegotiated recently.

He'll be here. Not only will he continue to be a productive part of this offense, he's important to this team as Sean looks to his locker room and gameday leadership. Joe is a class act. Don't count him out yet.

Offline
Colston is already the number 1. Hes gonna end up drawing better coverage this week then Joe. That could mean a huge day for Horn.

Offline
Joe's salary next year and his injuries the last two years make it doubtful that he will be a Saint next season.
OP
OP

cruize said:
Joe's salary next year and his injuries the last two years make it doubtful that he will be a Saint next season.
Click to expand...

Joe will be here, cruize. His injury this year is no comparison to last year. Joe could have played the last 2 games, but Coach Payton kept him out.

From Joe's own mouth, he's played at 50% in the past and still been effective. This coaching staff simply has a different philosophy when it comes to injuries.

Coach knows how important it is to have Joe healthy for the stretch run.

Regarding next year, until the Saints find another #2 that can compliment Marques like Joe (I.E. Marvin Harrison/Reggie Wayne - Indy), Joe will be here.

He's played with double coverage since his first season, and still put up better numbers than any receiver before him. Now that Marques will be getting the doubles, Joe will be a monster in 1 on 1's.

Offline
Joe reminds me of Yoda

SLUsaint504 said:
Joe reminds me of Yoda
Click to expand...

Yeah, but Yoda wasn't as fast as Joe, and he was only about the size of the football.

Offline
i hope not, we need this offense to stay together for a couple years so we can work on the D and win a championship! 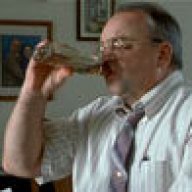 Offline
The real question is, when is Joe gonna give Colston a nickname?

He'll be here. Not only will he continue to be a productive part of this offense, he's important to this team as Sean looks to his locker room and gameday leadership. Joe is a class act. Don't count him out yet.
Click to expand...

Was that renegoiated recently? Thing is that, if you go look at Joe's contract (at least the current one at NFLPA website) his contract REALLY escalates after this season. He'll be making 4-5 million per year for the remainder of the contract:


I like Joe and I hope he can stick around but unless he agrees to restructure his contract, I am not sure he'll be here.

Offline
imho, joe knows the team is in good hands, now, with colston, etc. if he is able, he will play maybe another year. if he thinks he will slow the team down, i think he'll bow out with a negotiation on this remaining contract (if that's possible). he has four (five?) really young kids to support, none even in jr high yet. that would be the only real factor that i can see to cause him to play past his prime or his heart for the game.
OP
OP

Dastar said:
I like Joe and I hope he can stick around but unless he agrees to restructure his contract, I am not sure he'll be here.
Click to expand...

Nothing Joe has shown since he's been here leads me to believe he is anything other than a team player. Equally as important, N.O. is his adopted home, and he loves the fans.

Sure, money is very important to him, and his family's security and future is as well (it is to all of us), but it's hard to imagine Joe not being willing to re-structure his contract, if that's what it came down to... And I dont think it would be next year anyway - he deserves to get paid next year for what he's meant to this franchise... I think Mickey and Rita know that also.

If we're sitting on the brink of a SB next year (and I believe we will be), Joe's presence will be an important part of that. I would be shocked if he wasn't a part of this team in 2007, and more importantly, disappointed in the Saints front office.