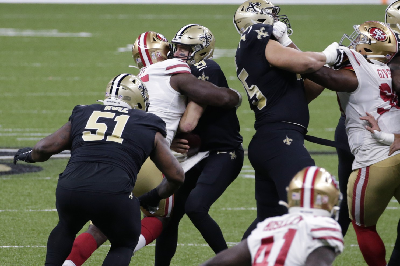 New Orleans Saints quarterback Drew Brees told ESPN on Saturday night that doctors have been encouraged by his progress, specifically improvement in lung function and the continued dissipation of the pneumothorax suffered in the first half of last week's victory over the San Francisco 49ers. They've also discovered additional rib fractures, he said.

Brees went on injured reserve Friday afternoon, meaning he must miss at least three games while recovering from cracked ribs and a punctured lung.

With the lung injuries the first concern, Brees said he had X-rays and CAT scans and has been seen by doctors every other day this week. They have confirmed a total of eight rib fractures on his left side and three on the right, he said. That's more than double the total from testing performed Monday, which revealed five fractured ribs.