Should the Saints pick LSU WR Justin Jefferson in the first round of the NFL Draft? (1 Viewer) 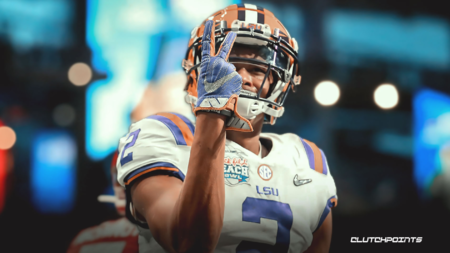 Justin Jefferson of LSU knows that the 2019 NFL season was another case of “close, but no cigar” for the New Orleans Saints. While the team was terrific in the regular season, posting a 13-3 record, things went south in a first-round loss to the Minnesota Vikings. Quarterback Drew Brees has re-upped on a two-year, $50 million contract. As a unit, New Orleans is still a contender.

With that said, there are a few areas for improvement. Head coach Sean Payton has done a good job getting the most out of the talent general manager Mickey Loomis has surrounded him with. As long as Brees is on the team, Super Bowl-or-bust is the expectation for “Who Dat” nation.

The Saints currently have the No. 24 pick in the 2020 NFL Draft. There’s been some buzz about what position the team will make a pick at, but linebacker and wide receiver have garnered most of it. Both Patrick Queen and Kenneth Murray would make excellent selections there, but what if Brees gets another weapon to work with? LSU’s Justin Jefferson makes a lot of sense. ...