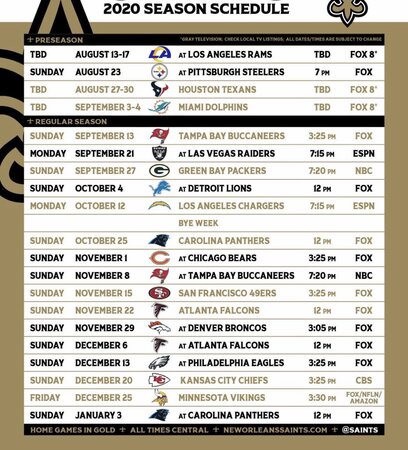 Offline
Gosh there is a lot of late games which I am never a fan of. I am always a fan of noon games just to get the anxiousness over with early on. Really hate waiting for a game to start at 3. It is mentally exhausting.

Offline
I would say I hate that 3:30 game on Christmas Day....but at least it's not Noon.

Not a fan of 3 straight road games though.

Offline
I don't like the early BYE week.
I get the feeling that the Brady Bunch was able to get a later one like he did with the Pats last year.

Offline
Four of the last six on the road... including a winter-esque game in Carolina in early January.

Offline
Our bye is way early and we on TV alot.

Something to watch on Christmas!

Offline
We need to start the season 7-0 based on that schedule.

Go 5-3 over the tough part of the schedule and then end the season beating Carolina.

ndcc said:
Four of the last six on the road... including a winter-esque game in Carolina in early January.

They can warm themselves with the flames of the Carolina dumpster fire.

Offline
Well, I see another 13-3 season.

that was a quick edit

Offline
Brutal stretch with 5 out of 7 on the road with 3 straight in November, Only five 12 noon kickoff games and a partridge in a pear tree.

Offline
We going to be in the very first regular season game in Vegas, so that’s pretty cool. I figured they would have Brady v Brees to kick off the season. Super early bye week which stinks. The later the better IMO. Pretty tough playing the 2 super bowl teams in the 49ers and Chiefs. At least they both in the dome though. The Packers, Chargers, and Vikings at home. Glad we get to play the Vikings again and we better step up & kick some tail unless that ends up being a meaningless game which I hope is the case. So we got the Raiders in the 2nd Monday night game of the year then Green Bay the next week on Sunday night in the dome, then the Chargers on Monday night in the dome on 10/12, and at the Bucs on Sunday night 11/8. We got one CBS game on Sunday with the rest Fox. At Chicago on 11/1, at Denver on 11/29, and at Philly 12/13 looks to be the only possible cold weather games. like it
Last edited: May 7, 2020

Bill said:
I don't like the early BYE week.
I get the feeling that the Brady Bunch was able to get a later one like he did with the Pats last year.

Just as I suspected, Tommy Boy gets his BYE week in December.
The league isn't even trying to hide the favoritism.

Listening to Saints game on your cell?