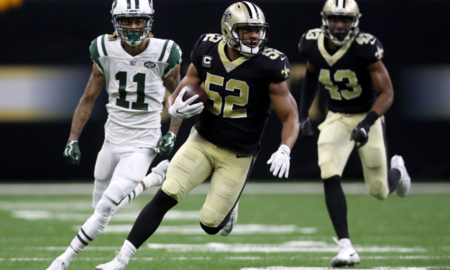 This NFL offseason has been quite hectic for several reasons. Not only has there been a ton of player movement in free agency, but training programs have been put on hold due to health concerns. Saints linebacker Craig Robertson recently shed light on this offseason and how this experience has been for him.

Robertson appeared on my podcast, Straight-Up Saints, to discuss what New Orleans needs to do to win a Super Bowl, potentially playing in an empty Superdome and much more.

During his time on the show, Robertson also gave his thoughts on Tom Brady’s move to the Buccaneers. It’s certainly possible New Orleans and Tampa Bay will battle it out for the NFC South title this fall.

“Every game you look at different, right? Tampa Bay has been a team that we look at where it’s always going to be a tough game, and whoever had the better defense that day would win,” Robertson said. “Now that they have Tom Brady, who’s one of the best to ever play the position, we’re going to have to play a full team game. It’s going to be different seeing him there. The NFC South is just loaded with top quarterbacks right now, so all are division games should be fun.”