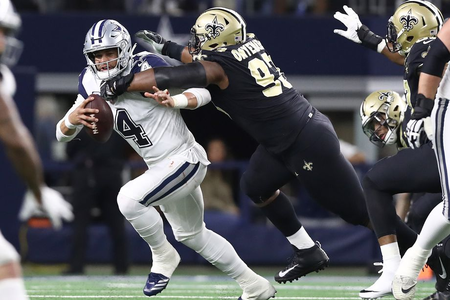 Even though it was a painful loss, the third-year defensive tackle gave it his all and more than doubled his career sacks.

Throughout the 2018 season, most talk about the defensive line has centered around the all-pro Cameron Jordan, Sheldon Rankins, or rookie Marcus Davenport. But a third-year player rose to the occasion and had a career night against a normally stout offensive line.

David Onyemata had a bit of a coming out party against the Dallas Cowboys, and he chose to do it in prime-time for the whole country to see. It was unfortunate that the Saints were not able to get the win behind the three-sack performance of the defensive tackle, but his play along with the rest of the defense showed the they can win in the trenches against stout teams.

Onyemata won his match ups in multiple ways. Rather it was him stringing together pass-rush moves or just out-powering his man, he was a force to be reckoned with.

On his first sack of the day, Onyemata showed off his strength and flexibility by manhandling guard Xavier Su’a-Filo. ...